Every Chef Has A Little Secret 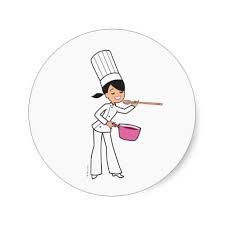 Ever wonder what Chefs eat, when they're not hurriedly gobbling bites while standing over the trash can before rushing back to work the line? You might be surprised to find out many talented and experienced cooks indulge in dishes far less spectacular than what they send out to your restaurant table.  Equally interesting is while they often make efforts to dine at the industry's "hottest" spots or frequent restaurants run by close friends, many quietly eat at some of the most inane restaurant chains you can imagine.

An example is that of one of the most creative and focused chefs I've ever had the pleasure to work with.  After years spent cooking in a variety of restaurants in Las Vegas, starting at the tender age of sixteen in a Mexican restaurant, he moved on to establish the menu and set the bar for a high-end restaurant in Northern California. These days you'll find him wowing customers in the Pacific Northwest assembling fusion cuisine based upon his Caribbean heritage. But on the rare occasions he's in the mood for someone else’s cooking, he takes the wife and kids to . . . Olive Garden! Apparently he's a sucker for that salad and those bread sticks.
Another seasoned chef I know finds refuge after his ten hour shifts amid flying pots, pans and raging Salsa music in a bowl of Kraft Macaroni 'n Cheese.   Then there’s the rather famous set of twin sisters, both meticulous pastry chefs who can each spend an hour decorating one cookie.  They work side by side for a Hollywood catering company.  After their long shift they trek home in unison and together, throw some Kimchee over days old white rice, heat it up then top the concoction off with a poached egg. Then, in unison, they curl up on the couch and together watch National Geographic channel.  This is a daily occurrence during Shark Week.

And believe it or not, one of my visiting chef friends never misses his 2:00 a.m. runs to Roberto’s for a Carne Asada Burrito whenever he’s in Vegas.  This same chef, and mind you, he trained under Wolfgang then later went on to win a James Beard Award, can be counted on to have one of those $5.00 foot-long sandwiches from Subway sitting in his fridge at home as well as a box of Pizza Bites in his freezer.

Even I have a long time food secret. But there is a story behind it.  Up until about the 1970’s, the sleepy town of Sunnyvale California was as heavily populated with fruit orchards as it was residents.  Rows and rows of cherry and apricot trees filled what now houses Tech facilities, condos and mixed-use shopping centers.  I can remember sitting in the backseat as my parents drove under the bridge that carried can after can of fruit from one end of the Libby canning and shipping facility to the other.  The scent of so much fruit being cooked and boiled was overpowering, wafting its way through the surrounding neighborhoods.

One year, my father, a great lover of apricots, had decided to begin his own little cannery of sorts in our  backyard.  He left the house early one Saturday morning and returned with so many bushels of apricots the nursery rhyme “I love you a bushel and peck, around the neck” immediately made literal sense to me.
My little brother, sister and I continued playing Hide & Go Seek, running around the front and back of the house in anticipation of something special, but what it was, we didn’t know.  Shortly after dad lugged in the last bushel of apricots, my Nana, Papa, Uncle and his latest girlfriend (“the flavor of the month” as dad referred to them) arrived.  I had never seen my grandmother wear jeans before, so that in itself made for a special day in my mind.

Dad gathered us all together outback in a huddle instructing each on what and how to perform our part of this familial assembly line.  We kids were in charge of washing the “cots” under the running water of the hose to remove debris, while pulling off stems and leaves.  I have no idea,  where he found them or whether perhaps he made them, but there several wooden racks covering the patio, making the area look more like a mathematical grid than a place where we usually held barbeques.  We spent the entire day, cleaning, cutting, and pitting the cots then placing them between the slats of the racks.  The fruit was to sit for several days until they were shriveled and dried to perfection.

But at the end of our long and arduous day each one of us was covered in dirt, grime and sweat.  When one of the grownups asked “What are we going to do about dinner?”  Announcing out loud what, I’m sure, each of them felt, “Well, I’m certainly not cooking tonight.”  Someone answered, “Let’s go pick up some chicken.”

Uncle Frank and “Flavor” returned with buckets of Kentucky Fried Chicken, Mashed Potatoes and Gravy, Corn on the Cob and those Biscuits.  It was the most delicious dinner I had ever had. The crunch of the crispy skin and the moist meat inside made my mouth dance.  The soft biscuits which I dunked into the heavily salted and peppered gravy, brought such pleasure to a seven year old, it stays with me to this day.  So, now when I’m in need of comfort food or missing my family and childhood, you’ll find me making my own run to KFC.  I try to be discreet by making use of the drive-thru then scuttle home quietly enjoy my bliss.

Dad repeated this apricot drying ritual for several seasons.  He made apricot jam.  Apricot pies.  Apricot turnovers.  And insisted we snack on apricots when we kids complained of hunger between meals.  The scent of cooking apricots stayed with me for years.  It has only been in recently I’ve been able to enjoy apricots again.  But I do miss my grandparents, my uncle and siblings, especially dad and his apricot-everything.

My Recipe for Fried Chicken/An Adaptation of KFC

Process:
Place cut up chicken sections into a large bowl and season with salt and pepper. Pour in buttermilk, mustard and Frank's hot sauce, mixing to coat chicken completely.  Cover with wrap and allow to sit in fridge for 1-3 hours.

Remove chicken from fridge about 30 minutes before frying.  Meanwhile place flour in a large pan or dish and season with additional salt, pepper and all other dried seasonings.  Use a fork to mix seasonings into flour. 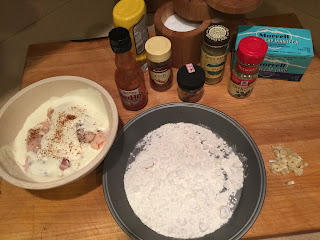 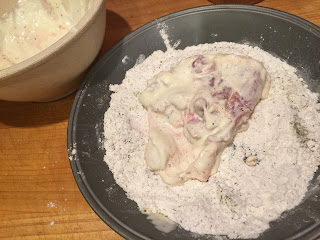 Once out of the fridge, allow chicken to come to room temp then dredge each piece in the seasoned flour.

Note:  Allowing the chicken to come to room temperature is important to get a good fry.  Many people make the mistake of taking a cold bird from the fridge then place in the hot pan or on the grill expecting to get a good sear.  Not going to happen.

Heat lard or Crisco and bacon fat over medium heat, until melted and shimmering in a cast iron skillet.  You'll need  enough oil/fat to immerse but not completely cover the chicken.  Check the temperature of the fat to ensure it has reached about 360-365 degrees. Temp will drop once you add chicken.  I cook over medium heat to avoid burning the outside while under-cooking the inside and cover the skillet with my splatter screen to avoid mess. 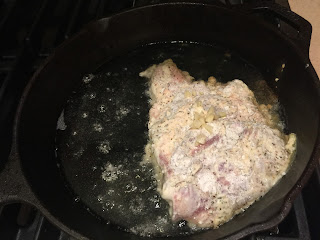 Once fat is hot enough, using tongs, carefully place a few pieces of chicken into skillet and sprinkle with bits of minced garlic.  You may need to fry your chicken in two batches to avoid crowding the skillet.  Crowding equals steaming and reducing your chances to attain that nice crispy crunchy skin.  Fry until browned on both sides.

Remove cooked chicken pieces and place on a cooling rack NOT on a paper towel-lined plate.  Paper towel-lined plate equals soggy chicken skin.  Allow to cool about 5 minutes then sit and enjoy.  Even the better the next cold.
Posted by CosmicMuffin at 9:41 AM No comments: