Picture it, 1974, a gorgeous June day in Palo Alto, California.  My interim boyfriend (Michael and I were on one of our many breaks) lay sprawled out on a blanket in Mitchell Park, enjoying over-stuffed deli sandwiches from Hobee's. Mine a tuna and avocado on toasted whole wheat, Brian’s; ham, turkey, provolone and cheddar on a soft and chewy baguette.  We share a bag of spicy chips and sip our sodas savoring our late afternoon lunch. We are protected from the glare of the afternoon sun, by the shade of a Cottonwood tree.  Swiping away at bits of airy cotton-fluff freed from the grips of their branches floating down and away from us, as though they are riding along an invisible lazy river.

I’m in my second, maybe third, year of college, majoring in dance.  In addition to classes I spend much of my time auditioning for dance roles in musical plays and working part-time as a waitress at Florentine’s.  At that time it was one of the best Italian restaurants in Mt. View and the most fierce competition for another, smaller Italian restaurant, which is still in operation today, Frankie, Johnnie and Luigi’s Too.

Brian, is married.  It’s the ‘70’s and “open relationships” are perfectly acceptable, I found this out from a girl who was seeing Michael.  Bu Brian is considering separation, so I can justify seeing him. He is about 14 years my senior.  Quieter and more cerebral than the men I usually date, Brian is really rather cute, with a trimmed beard and is only slightly taller than me.  I find Brian to possess a wonderful sense of humor and best of all, he is one of the smartest people I'd ever met.  He was an astronomer and worked at the Nasa Ames Research Center at Moffett Field.

On that particular afternoon we were engaged, as we often were, in a conversation that entailed Brian educating me on some aspect of his extraordinary job.  Usually, I am an adept listener, asking pertinent questions at the appropriate breaks.  But that day’s conversation took a different turn.
Brian was excitedly telling me about a new star he and his team at the Ames Research Center had recently discovered.   I asked him to explain how one goes about discovering a new star, or planet or even black holes.  Brian patiently and matter-of-factly told me, "Initially we don't actually see the star, rather we see evidence of its existence."

“You guys don’t actually see anything?” I asked.

“Not at first and sometimes, not at all.  But because everything in space is made up of energy, stars, planets, black holes, etcetera, they impact and influence their surroundings,” Brian’s voice took on a very professorial tone.

“Here’s an example,” he went on.  “There is often a magnetic pull or push emanating from the unseen star on the celestial bodies surrounding it.  After watching for a period of time, we see patterns of movement and changes that can only be explained by something affecting those stars and planets we can see or know exist.  This demonstrates evidence of the unseen heavenly body, so we know it’s out there.”  Brian smiled, satisfied he had helped his liberal arts girlfriend grasp a concept not usually explored in the world of dance.

“You’re sure it’s there?” I inquired with some skepticism.

“Well, we run experiments and tests.  We watch and document our findings for a good period of time.  But yes, once all the evidence has been weighed and sufficient reports have been written and reviewed, we declare our discovery.”

“Hmmm,” I mused.  “So, what I’m hearing you say (popular phrase in the '70's) is that you don’t actually see this new star, but based on other visible and tangible evidence you have certainty that the star is there, right?”

“Yup,” mumbled Brian as he took another manly bite of his sandwich.

“Oooh, my gosh!”  I exclaimed sitting up straighter.  “It’s just like Faith!  Having Faith in God when most of us don’t actually ever see God.  Yes there is a mountain of evidence, and I mean that both figuratively and literally, God exists!  Wow!  This is so cool, Brian!”

I sat smiling from ear to ear that I was able to draw such a relevant parallel between Brian’s science and my religious perspective. I then watched in horror as Brian began choking on the monster bite he had taken.

“Wait, what, yes, Brian," I spouted back.  "It is exactly the same thing.  Based on what you just told me about stars not actually seen, but declared to exist, you can’t absolutely deny the evidence of God’s existence.  You've even said some things in nature, science just can’t explain.  The unexplained origin or destruction of certain life forms.  The mathematical patterns in botany, geology and the human body.  The beauty of a sunset.  The birth of a new baby.  The way many life forms have adapted to the changes in climate and topography.  Based on what I see there is evidence of God all around me, every day.  So, like you and your peers, I can say with certainty, that God exists.”

Brian was quiet for several minutes, then replied, “Well, first know, Deborah, science can't explain everything, yet.  But my Cosmic Muffin  guess I can’t argue with probabilities.”  He tossed what was left of his sandwich into our picnic basket and laid his head on my lap.

While Brian was never involved in organized religion or had the upbringing I had, nor felt inclined to walk into a church, I knew I had given him some food for thought.

Back then, as now, I have known that Faith is something you feel, something you trust in.  An intangible concept but one that offers most of us some comfort and reassurance.  If you’ve ever known the relief that comes when you listened to your gut and didn’t board that plane, or buy those expensive shoes or marry that person, because if you had, the story would've had a less than happy ending, then you know the feeling.  It is one of confidence in your own thought process and deductions.  Faith is a demonstration of our core beliefs even when others may not agree, in spite of what they believe in or understand.

I learned about religious Faith as a child, attending church and reading the Bible.  But it was later in life when I finally understood how personal Faith can give me strength when my inner resolve is waning or I'm navigating my way through this maze called parenting.  Faith has been and will continue to be a source of comfort for me when I feel alone and incompetent.  Of course, Faith does not have to be religious in nature.  I have Faith in my son’s ability to sustain the changes he's made and his current path in life.  I have Faith in my Grandson’s goodness, intelligence and kindness.  I have Faith in my mother’s humor and strength, that it will only help us both in the weeks ahead.  I have Faith in my daughter’s love for her fiancée and his love for her.

During our entire hike along the Franciscan Trail, Nancy and I were ensconced in Faith.  I could touch it as well as feel it, Faith was palpable. Whether Nancy and I were standing before the entrance of the cave where Saint Francis of Assisi slept or focused our eyes on the scrap of cloth that carried a still bright red blood stain from his experience of the stigmata.

Or even as we stood squeezed together on the balcony of a medieval castle,observing the celebration of the Ceri Festival amid the brightly colored flags symbolizing the three Saints, Antonio, Giorgio and Ubaldo, Faith really was, all around.  So deeply touched by the mystical power of it all, both Nancy and I were humbled at almost every turn.  So it didn't seem to strange or pious the day we made the 7-mile hike through the woods of ancient Oak trees in absolute silence.  We felt Faith mixed with reverence as we brushed our Taus against the burial site of Saint Francis in Assisi.

Our Faith was renewed.  We felt recharged.  We felt such closeness to all humanity, animals, and nature.  St. Francis especially honored God's children and animals, Nancy and I were in awe and inspired.  St. Francis, it is said, is the one person in all of history who was most dedicated to imitating the life of Christ and who carried on Christ’s work in His way.  St. Francis was known to preach to birds, squirrels, snakes even, according to one story, persuading a wolf to stop eating the locals of a small village.

In honor of Faith and St. Francis’s love of animals, I am going to pay tribute to my many friends and family members who love animals as much as he did by sharing two recipes.  One for some yummy dog biscuits along with a little snicker-snacker for wild birds. 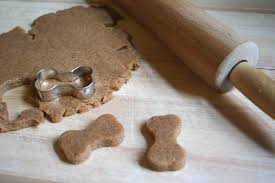 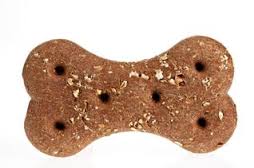 Biscuits can be stored in an air-tight container for 1 month.

Posted by CosmicMuffin at 1:14 PM No comments: