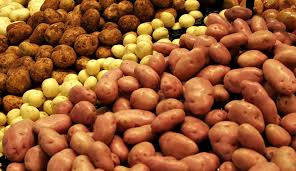 The speed at which I rode my bike gave way to a warm, summer breeze that blew through my long, unruly, auburn hair.  I was coasting my way along Castro Street towards home.  Downtown was uninhabited, though it was only 7:00 p.m., but the year was 1972. Mountain View California was not yet home to the Dot-Commers crowd.

Struggling to keep the roller skates I had tied together, laces around my neck, skates flying down, behind my arms, I tried not to lose my balance.  I loved riding without hands, arms outstretched one extending north the other to the south.  My back was erect and my head held high, I felt as giddy as a school girl.  Probably because I was a giddy school girl. 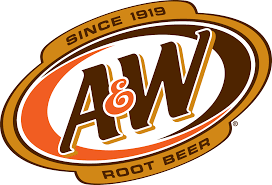 I had just finished my shift at A & W.  Working part time as a carhop, I didn’t always wear my skates, but even then, knew enough to appreciate the impending end of an era.  Though I was deep into tie-dye, bell bottoms, and belts with riveted holes from end to the other, I would, on occasion  embrace traditions of the 1950’s.  Besides as a dancer, wearing skates while working, only helped to strengthen my legs.

With less than an hour to get home and ready myself for a date with my boyfriend Kyle, I was committed to taking a quick shower.  Not wanting him to suffer breathing in my usual perfume of burgers and fries, an inadvertent aromatic I wore regularly.

I clamored into the house and tossed my skates onto the hardwood floor with a crash and a clunk.

“Meeting Kyle,” I shouted, more loudly than I had intended.

“Well you’re not leaving those skates there on the floor,” Dad reprimanded.
“Okay,” I answered in a more respectful manner.  Though I made no effort to go back and pick them up.  Instead, I scurried into the bathroom, stripped off my orange culottes and white blouse with brown piping.  This was still the official uniform for those who served Papa Burgers, Mama Burgers, Baby Burgers, with a side of fries and the proverbial root beer float.

Deciding to forgo washing my hair, I loosely pinned it up.  Suddenly, I realized, though I’d been working around food for the last 7 hours, I hadn’t eaten all day.  Lying on my bed in order to zip up skin- tight jeans, then ripping the tag off my new peasant blouse and donning a pair of clogs, I hurriedly made my way to the kitchen.   I stirred a large amount of Hershey’s chocolate syrup into a tall glass of cold milk, as my step-mother’s brother-in-law stood watching.  With a quizzical look, he asked, “Is that all you’re going to have for dinner?”

My dad walked in shaking his head at the brief exchange he had overheard.  Stepping up to the stove, he gave the Amatriciana sauce he had simmering a good stir then a taste.  “Chocolate milk is her favourite meal,” he retorted, adding a pinch of finishing salt then offering me a taste of the sauce from his wooden spoon.  I obliged then immediately regretted my decision.  The sample of dad’s rich tomato sauce awakened my hunger.  As I dipped my chocolate coated spoon into the pot for another taste of sauce, I noticed him eyeing me up and down.  Lately Dad had been scolding me for wearing cut-offs and skirts he deemed too short, or blouses cut too low, telling me I was sending the wrong kind of message.  Since I wasn’t in anything too revealing, Dad instead made commentary about my hair.  I smiled, leaned in to give him a kiss, tossed a wave to my uncle and turned to leave. 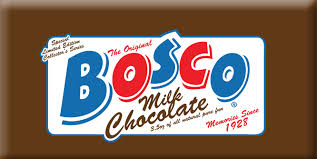 Folding myself into my little brown Austin America, I had dubbed “Bosco,” after another popular chocolate syrup, I drove towards Moody Road.  The sun had grown dim behind gray clouds and spots of rain began to fall on my windshield.  Neil Sedaka sang “Laughter In The Rain” on the radio and I could smell the beginnings of autumn in the air.  My favourite time of year.  I couldn’t help myself.  I joined in with Neil, and sang the chorus with heartfelt enthusiasm – “Ooooh, how I love the rainy days and the happy way I feel inside. . . .”

By the time I arrived, I was indeed happy.  Kyle’s dog Honey ran up to meet me.  I’m not much of a dog lover, but Honey was an exception.  A gentle, golden retriever, with a sweet disposition, Honey never ran and jumped on me.  Instead, she would meander her way over then sit and wait until I reached out to pet her.   “Where’s your daddy?” I asked Honey.  I looked up to see Kyle was further up the gravel road, feeding the horse he was caring for while the owners of the property were in Ireland.

After our usual greeting of hugs and kisses mixed with a fair amount of groping, as Honey watched through soft, approving eyes, Kyle stated he hadn’t eaten all day and was ready to forage for some food.

“I don’t know.  I’m not terribly hungry.  I just had some chocolate milk.”

“That’s not a meal,” scoffed Kyle.

I followed Kyle to the small bungalow he was renting, a studio furnished only with a twin bed, a dresser and a hot plate atop a mini-fridge set in what doubled as an open closet.  His few shirts were hanging on a pole on the right side.  He prepared a cup of hot tea for me since the weather had quickly changed and rain was now pelting down like pebbles .  Kyle had jumped into the shower and began calling out a list of fast food restaurants he thought I might like.  “How about In & Out Burger?  Burger King?  Jack-in the crack?”

“I want to sit down and have a glass of wine.  None of those places have wine,” I whined.

“Too Taste-T? Oh wait, no wine there either, just beer.” Kyle continued.  “Frankie Johnny and Luigi’s?  Oh!  I know where they have some great fast food and wine!” Kyle exclaimed.

We went to Clarke’s, an old fashioned burger joint with a fireplace and an extensive fast food menu.  In business for 50 some odd years then, and still in operation today, Clarke’s continues to boast an offering of burgers from All American charcoal fired, to Canadian, from French to South of the Border, Hawaiian and Turkey.  Best of all, a selection of fries for even the most jaded.  Those of us who really know pappas, pommes frites or any other name for these crispy,wedges of tubers, submerged in piping hot, clean oil not once, but twice, creating a crispy outside with a moist and tender inside, we're in our own version of gastromic heaven at Clarke's.
The offerings at this family restaurant went beyond anything I had ever experienced.  Kyle ordered a cold brew with his Clarke’s Burger, I went with a robust Zinfandel alongside my order, which consisted of every  style of French Fry offered;  traditional, sweet potato, garlic and chili.   I assured Kyle I would share with him.

Some may not know, the origin of the French Fry, is not French at all (though that is still debated) but  hails from Belgium.  The story goes; that the poor villagers living in Meuse Valley, typically fried the fish they caught from the nearby river.  During the winter months, when the river would freeze over, they took to frying up other food items in the same manner they prepared their fresh fish.  The potato being one of them.  When American soldiers were stationed in Belgium during World War I, they took to calling the fried potatoes French Fries, as French was and is the primary language spoken in Belgium.  Hence the French are given credit for creating these salty, savory sides to our burgers and sandwiches.

I kept my promise and shared the panoramic choice of fries placed in front of me with Kyle.  Though it took two glasses of wine and three beers, we emptied those small paper boats, lined with red and white gingham paper, leaving only small bits of fried deliciousness behind.  The stirrings of hunger after tasting Dad’s sauce were quieted in a most satisfactory manner.

* Since it is so easy to Google the wide variety of preparations for excellent fries, I thought I'd introduce, for those who aren't familiar, a recipe for one of my very favourite ways to eat fries; Poutin! 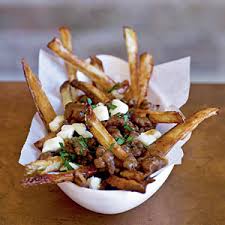 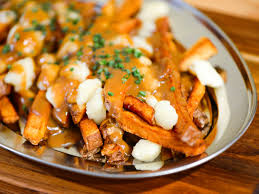 Using a large Dutch oven or other large, heavy pot, heat oil to 350 degrees.  Carefully lower potatoes into hot oil with a slotted spoon or spider.  Do not over-crowd the pot, you will likely need to do this in batches.  Cook potatoes until lightly browned, about 5 minutes.  Turn off heat and remove potatoes from oil and again, place in a single layer on clean paper towels to cool completely.

Meanwhile, heat gravy in a small saucepot until hot.   Set to side until ready to use.

Reheat oil in pot to 425 degrees adding potatoes to pot, in batches if necessary, cooking until they are golden brown, about 5-7 more minutes.  Turn off heat and remove potatoes from oil and again, place in a single layer on paper towels then immediately season with salt, pepper and choice of other seasoning.

To assemble: divide fries among 4-6 individual bowls.  Top each with 1/2 the cheese curds, spoon desired amount of gravy over the top then garnish with remaining cheese curds and chives or scallions.

This dish is a one-bowl wonder!  Perfect with a cold beer or glass of white wine.  Comfort food at its best!


Posted by CosmicMuffin at 1:53 PM No comments: