From Loaves And Fishes to Vapors And Foams 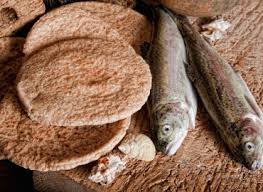 Most of you are familiar with the Biblical passage of Matthew 14:13-21, the one that tells the story of Jesus’ retreat to a distant and isolated area off the shores of the Sea of Galilee.  Though he went there seeking solace to mourn the beheading of his friend and mentor, John the Baptist, throngs of people followed him.  His reputation for healing the sick and ailing preceded him.
So it was, after a long day of prayers, blessings and laying of hands, Jesus, his disciples and the 5,000 followers, were, of course, hungry.  Out of genuine concern one of the disciples suggested, since it was getting late, perhaps it would be a good idea to send the people away so they could go home or into the village for something to eat.  “That is not necessary - you feed them,” replied Jesus.  This response was met with reactions like; “But Jesus, we don’t have that much,” (I’m paraphrasing) “Hey man, we have only five loaves of bread and two fish here!”  They continued to moan, “That’s barely enough for our own supper!”
Jesus sighs, somewhat exasperated, and calmly directs his brethren to bring the sparsely filled basket to him. 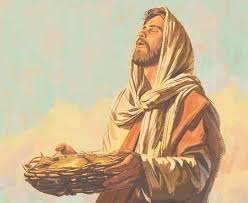 After casting his eyes to the Heavens, reciting a few prayers and bringing blessings upon the scant meal, Jesus divided the contents of the basket into twelve pieces and told his followers to continue breaking the bread and distribute it among the crowd, along with the fish.  Still somewhat leery, but trusting Jesus, the disciples did as they were told.  As they moved among the crowd, from person to person, the twelve were stunned to see there was indeed enough, actually more than enough.  For after dispersing the original five loaves of bread and two fish through the immense crowd and enjoying their own servings, everyone’s stomachs were filled to satisfaction, all 5,000 men, women, children and the disciples themselves.

Preparation
Place cooked, chilled salmon into bowl of food processor.  Make sure there are NO pin bones or other inedible parts to your fish prior to putting it into mixing bowl.
Add cream cheese, 1 teaspoon of fresh dill, salt, pepper, juice and zest of 2 lemons, cayenne pepper, heavy cream and half of the brandy.  Blend ingredients together until a smooth paste is formed.  Taste to adjust seasoning to your liking.  If you need more salt, pepper, lemon or dill, add it.
If mousse is too thick add remaining brandy to thin slightly.  But remember, you want a consistency that can molded or spooned into individually shaped servings.Once mousse taste exactly how you want it, you may:

A)Spoon into individual ramekins – then garnish with salmon roe, caviar and/or fresh dill
B)Spread into a fish shaped mold that has been lined with plastic wrap for easy removal from mold
C)Shaped into rounded mounds then wrapped with remaining smoked salmon pieces
D)Spoon into a piping bag and pipe onto top of cucumber slices
E) Spoon onto triangles of toasted bread

Posted by CosmicMuffin at 5:52 PM No comments: