So, not everyone fell in love with Lynda and Larry, who during a chance meeting, discovered they each had an unusual affinity for Lychees.  I do hope, however, you gave my lychee ice cream recipe a try – it truly is delicious.
Just a note; I shared my delectable treat with a few culinary friends, and while their responses were positive, one of my chefs told me I had actually prepared a sorbet. “No,” I replied, “it’s ice cream.”  “Nope,” he said smiling, “it’s not creamy enough to be considered ice cream.”  It was true, though smooth and sweet, with the succulent tone of lychee and a few high notes provided by the fresh lime zest and grated ginger, my concoction was not terribly rich and creamy.


“You didn’t add enough sugar,” my wise-sage of a pastry chef continued.  “I didn’t use any sugar.” I replied proudly.  “I used honey.  And not much of that, since lychee are so sweet on their own. “  Chef “L” (his name really does begin with the letter L, I’m not making this up) went on to explain a good dose of sugar works to reduce the ice crystals, while acting as a stabilizer when churning.  I can use honey, sugar even corn syrup, but no matter which sweetener I chose, if the desired outcome is ice cream and not sorbet, I need to be a bit more generous.  Next time I prepare my lychee ice cream I will indeed add an additional ¼ cup honey – for a creamy, velvety outcome.
Posted by CosmicMuffin at 11:42 AM No comments: 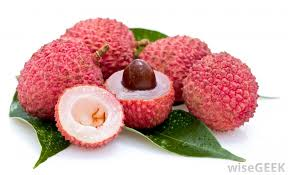 There once was a lady named Lynda.  She lived in Louisiana and loved lychees.  She often ate them fresh, sometimes incorporated them into her baked desserts or added them sliced, to her salads.  But Lynda wasn’t happy in Louisiana, she longed to leave her job at the Laundromat , with all its noise, lone socks left in dryers and coins jammed into machines clearly marked, “out of order.”   Instead Lynda wanted to lead a life of glamour and glitz, and follow her calling as a line-dancer.
Lynda finally made her move to Las Vegas and found a tiny studio apartment just off Spring Mountain, in an area known as China Town.  Within a week she found a part time job working as a waitress and spent her first day off lining her warped and splintered kitchen cupboards with pink floral contact paper .  By late afternoon, deciding the kitchen was as ready as would ever be, she went shopping at a nearby Asian market.  It was there she met Larry.  They were both reaching for the one can of lychees on the shelf.
He was left-handed but that didn’t matter.  He loved lychees as much as Lynda.  He tole her he kept a staple supply of lychee simple syrup to use in cocktails of his own creation.  He always included dried litchi nuts in his homemade trail mix when hiking.
Larry and Lynda fell in love quickly once they realized they both loved  lychees.  They decided to live together. Though light on money they were large on ambition, working hard and happy, not really caring they lived in lack-luster apartment.
Every evening, after a dinner of noodles and vegetables, followed by a couple of canned lychee for dessert, Larry headed off to work as a bartender at a lively biker bar.  Lynda would blend up some lychee in her smoothie then race out the door to dance classes and auditions between shifts at the restaurant.  While everyone was impressed with how limber she was, alas, she was not tall enough nor well-endowed enough.     Lynda’s drive to dance was beginning to lag.  Larry lamented almost nightly about the smoke the loud music and the fights that occurred in the bar.
Now it had always been Larry’s dream to open a Laundromat, actually an entire chain of Laundromats!  So after months of let-downs and too little money, Lynda relented and taught Larry everything she knew about running a Laundromat.
Today, Lynda and Larry own a league of Laundromats.  They have lots of money and live in a larger and more lavish apartment where they invite all their friends for parties and gatherings.  Of course Lychee fruit is always on the menu, whether it is stirred into a mojito during a barbeque or shaken into a martini during a quiet dinner.  Lynda and Larry laugh when they see their friends’ eyes pop when they are shown how to peel, pit and pop a fresh lychee into their mouths.
Lynda likes to experiment and see how far she can go with this ancient fruit of Chinese origin.  Everyone loves her lychee and coconut ice cream and Larry’s spicy and sweet lychee salsa.
How I  wish Larry and Lynda were my friends.  However, they've inspired me to go out and scavenge up some lychee fruit, fresh or canned. 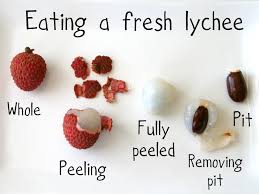 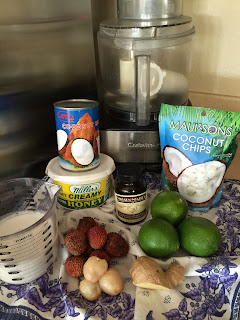 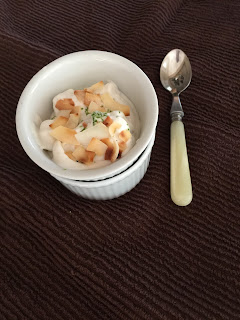 1)      In a medium saucepot, over medium heat combine sugar, water and honey.  Stirring until sugar has completely dissolved.  Allow to cool slightly
2)      Using a good blender or food processor, combine the cooled sugar/honey mixture, lychees, coconut milks,  ginger, zest and juice of the lime, vanilla and salt.  Blend until smooth.
3)      Pour mixture into a covered container and allow to cool completely in refrigerator – about 1 hour.
4)      Pour ice cream base into frozen ice cream drum and follow the manufacturer’s directions for your particular ice cream machine.
When finished, garnish each serving with a sprinkling of the grated ginger, chopped mint and toasted coconut.
*To toast the coconut simply spread shredded or shaved coconut onto a cookie sheet lined with parchment paper or foil, in a single layer.  Toast in a preheated 450 degree oven for about 5-10 minutes OR you can do this in a large skillet on your stovetop.  Just don’t walk away, no matter which method you use, the coconut burns quickly.

Some Lychee Trivia:
Lychee is the sole member of the genus "litchi" in the Soapberry family.  It is a sub-tropical fruit born of Evergreen trees native to the Guangdung and Fujan Provinces of China.  Now these monstrous trees are cultivated all over the world, India, South Africa, Vietnam, Thailand even California and Florida.
The delicate whitish pulp is encased in a pinkish-red prickly rind, which is NOT edible.  The taste of the fruit is sweet and rather perfumy.  Think watermelon and strawberry. 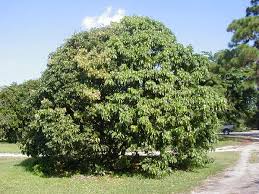 Posted by CosmicMuffin at 7:32 PM No comments: