You may know it as Water Spinach or Kangkong.  Until searching out seasonal foods beginning with the letter Oo, I had never heard of Water or Asian Spinach.  When I saw photos of it growing in its natural habitat it was obvious this would make for a stunning addition to any garden!  Ong Choy is reported to do very well in hydroponic systems, with one report indicating it is a rather prolific ground cover in hot climates.  That’s Vegas!  But I can’t say I’ve ever seen this plant used as ground cover in our valley.  Any Master Gardeners out there with information on growing this plant as ground cover please share.  If it’s indeed do-able I’d be interested in trying.  I think it's lovely, as the flowers look similar to Morning Glories, to which Ong Choy is related.  Another surprise, sweet potatoes happen to be a close relative, though I don't see the connection. 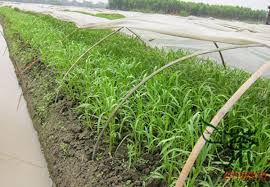 A summer vegetable, Ong Choy, literally grows in the water ways of tropical and subtropical climates, loves lots of direct sunlight (Vegas) and can be rather invasive due to its abundant and fast growing nature.  The entire plant is edible, though it is not recommended it be eaten raw.  Unlike American Spinach, Ong Choy is a bit heartier and takes longer to cook. 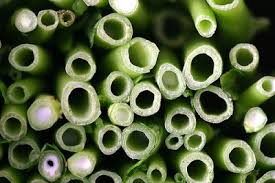 I was able to find Ong Choy at one of the markets on Spring Mountain, as this is a commonly used ingredient in Asian cuisine.  The stems are much thicker around than American Spinach and I was surprised to see they are actually hollow!  Yet the hollowness doesn’t speed up the cooking process, the stems still need to be cut and added to the wok or pot before the leaves.  Which also need to be chopped, as they tend to get a bit stringy, kind of like the stems of artichokes.  As a matter of fact, Ong Choy has that same nutty flavor characteristic found in artichokes.  High in vitamins A and C as well as a good source of calcium makes Ong Choy a healthy choice for pasta dishes and other vegetarian entrees.

Summer at my house equals lots of grilling.  But you can’t grill every night.  So simple one-pot meals are a great alternative.  I decided to use my purchased Ong Choy in a stir-fry.  So easy and tasty with just a few ingredients.  Feel free to add your favorite stir-fry vegetables to the recipe below

Cooked rice or noodles for serving

* Special Tool: Wok or large deep skillet if you do not have a Wok

Procedure
1)      Cut and remove bottom ends of stems on Ong Choy – chop remaining, usable portion of stems as well as chopping the leaves
2)      Pour grape seed oil into hot wok
3)      Add garlic and sauté just until soft – don’t let the garlic burn, it will taste bitter
4)      Add the chopped Ong Choy stems and allow to cook about 2-3 minutes
5)      Add red chili peppers, Ong Choy leaves, grated ginger, rice wine vinegar, soy sauce, bean curd and sauté another 2-3 minutes
6)      Add chopped peanuts and cook one more minute
Taste for seasoning adding salt or pepper to taste.  Though you really shouldn’t need any since the soy sauce and bean curd are a bit salty and the red chilies should provide you with enough heat.
*Remind your guest not to eat the whole red chilies – unless they can take the heat.
Serve over cooked rice or noodles                                                    Makes 4 servings

Posted by CosmicMuffin at 11:22 AM No comments:

Never say Nectarine . . . if you really mean peaches.  It’s surprising how many people confuse the two.  Similar in shape and coloring, peaches originated in China and were introduced to Europe and later the New World, by way of Persia, hence the old moniker Persian Apple.  Nectarines also originated in China, but have since undergone lots of propagation and modifications.  Peaches have fuzzy skin while the epidermis of the Nectarine is smooth.  Both have large pits in the center are in season from about May to October, with Nectarines coming onto the fresh produce scene a bit later in spring and finishing up closer to September.  Nectarines also seem a bit more delicate and sensitive than peaches as they are prone to brown rot and diseases.  Generous amounts of vitamins A and C can be found in both these fruits.  And while there are a great variety of both peaches and nectarines they are separated into two groups known as clingstones and freestones.  These terms refer to the ease or difficulty with which the pit can be separated from the pulp or meat of the fruit inside.


In terms of culinary, I suppose you could use peaches and nectarines interchangeably.  Although it has been my experience that peaches are juicier making them my preference over nectarines in pies, cobblers, and tarts.  Although Nectarines hold up really well in salads and in sauces melding the sweet with the savory.  Think of them as a luscious alternative to applesauce over thick, braised pork chops.  And while peaches or nectarines would make for a wonderful ice cream or sorbet, it has been my experience nectarines hold up better on the grill than peaches.  So that’s what we’re going to do this week. Grilled Peaches and Panna Cotta. 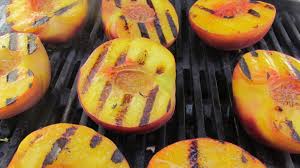 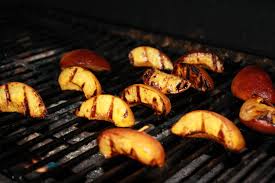 Panna Cotta is an incredibly simple (takes about 7 minutes to prepare) and lovely dessert to have as part of your recipe repertoire.  Generally a warmed assembly of milk, heavy whipping cream, a sweetener and unflavored gelatin, poured into individual ramekins, then unmolded onto a plate and topped with fresh fruit or a colis.  Northern Italians lays claim as the originators of this creamy confection.  But there don’t seem to be any references to Panna Cotta (literally translated means cooked cream) in any Italian cookbooks prior to 1960.  It’s rumored the dessert was in fact created by a Hungarian woman who happen to live in Langhe, which is in the Piedmont Region of Northern Italy.

1)1      Measure the cold water into a large mixing bowl.  Sprinkle the entire envelope of gelatin into the water and set aside.
2)2      In a heavy, medium saucepot, whisk together the heavy whipping cream, salt and sugar, over low heat just until sugar completely dissolves – Note: if you’ve decided to use buttermilk or whole milk in place of yogurt add that ingredient to the saucepot as well (yogurt is added later).   Do not let this mixture come to boil.
3)3      Remove saucepot from the heat and whisk in vanilla paste, lemon zest (and rum or other ingredient of choice)
4)4      Pour warmed milk/cream mixture into the bowl of gelatin and stir until well mixed.  Now whisk in yogurt.
5) 5     Pour panna cotta mixture into 6 individual ramekins that have been lightly brushed with the unflavored oil.  Place in refrigerator until cool and firm.

Meanwhile – cut nectarines in half and remove pits (hopefully you purchased the freestone variety). Lightly brush grill with oil and grill both sides of nectarines for about 2-3 minutes per side.  You should have nice marks showing before you remove the fruit from the grill.  Immediately after removing the fruit from the grill, slice the nectarines into thin slices.  Place nectarine slices into a large mixing bowl also lightly greased with the unflavored oil, then drizzle with honey and sprinkle with cinnamon.  Cover loosely until ready to use.
For plating up, slide a thin knife along the inside edges of each ramekin and invert the panna cotta onto a small dessert plate or shallow bowl.   Spoon the sliced, honeyed nectarines over each serving of panna cotta.  YUM!!! 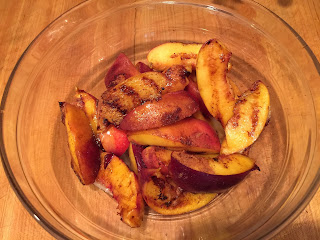 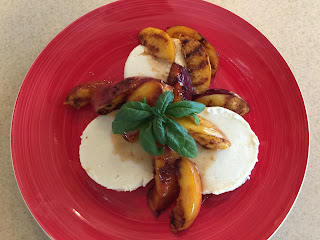 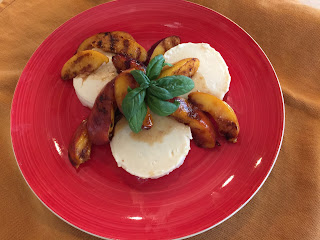 For an even simpler preparation you can pour a generous spoonful of marmalade or a commercially prepared raspberry-chipotle sauce over each serving of panna cotta!  Sweet marmalade with its tart citrus taste is great over this and the raspberry-chipotle with its sweet/smoky heat over the cool panna cotta . . . oh!  Easy-Sneezy.
Posted by CosmicMuffin at 11:15 AM No comments: