Some Burgoo Will Do for Saint Patrick's Day


"You shure know how to cook Chef Deborah,” the words dripped from his mouth like sap from a Maple tree.  I smiled up at him with sincere appreciation, though my smile was somewhat weak due to the Restyln injections I had received the day prior.  I didn’t speak, instead I thought, Gawd, I can just bathe in his accent.

I momentarily stopped whisking the Zabaglione offering him a taste from the tip of a finger I had just submerged in the rich, sweet, frothy, egg mixture.   I am of Italian descent and by now comfortable with my cooking, so this is a dessert I felt confident preparing.  I knew he would very much enjoy the taste and texture of this luxurious custard.

We were still getting acquainted with one another.  I knew he was an Italian man with some Irish and I’m not certain what else.  But whatever else, it made for a strapping 6’ 4”, dark hair, blued-eyed, Southern Gentleman.  A tobacco farmer by trade, he left North Carolina the previous year and came to Las Vegas in search of money, women and more money.  He gave up the long hours that come with farming along with the dirt and grime, for pens, paper and 24-7 clients.  Just before meeting me, he had found those women, lots of them.  But I put a kibosh on any further searching.  However, he was still working on the money part.

His mother was the Italian, his father Irish.  My friend was big and strong, yet soft spoken and I loved cooking for him.  The zabaglione wasn’t for him, but a party I was working later that evening.  But I had promised to prepare a real Irish dinner for St. Patrick’s Day that upcoming weekend, in celebration of his heritage.

“So, I suppose you want the traditional Corned Beef with Boiled Potatoes and Cabbage,” I stated flatly.  “Oh, and some good grainy mustard for garnish.  Did you want some Irish Soda Bread too?”

“Well, now Chef, you haven’t done the homework you usually do,” he drawled.

“What do you mean?” I pressed.

“Well, I’d be happy to explain, provided you give me a real man’s serving of that pudd’n there.”

“It’s not pudd’n; it’s an Italian foamy, custard.  But okay.”After dramatically placing some fresh berries I had in the fridge into the bottom of a fluted champagne glass, spooning plenty of the custard on top, then more berries, I set the sensuous dessert in front of him and continued prepping for my event.  “I’m listening,” I said, as he took his sweet southern time moving the spoon from the glass to his mouth, seemingly forgetting I was there.

“Do you have any CD’s of the Chieftains I can play while I eat and teach you a thing or two about Irish cuisine?” he inquired, one eyebrow raised.

“Oooooh wee, listen to the Chef use the word fetch,” he teased.
“Get talk’n kind sir,” I giggled.   (It was new love so I was still giggling).

“To begin, traditional Irish fare consists of dishes like Irish Stew and Shepherd’s Pie prepared with lamb, mutton (an older sheep, around 3 years) or goat.  There’s porridge, made of oats, barley, and wheat meal mixed with some water or buttermilk.  No sugar.  On the side, a torn piece of soda bread spread with freshly churned butter and a drizzle of honey.  And of course you know about the potatoes, Chef.   Potatoes became a mainstay for the impoverished Irish after the English conquest in the early 17th century.  Most of the more involved dishes of Irish cuisine went by the wayside as their land and food supplies were taken by the English to be sent to Englanders back home or given to the English armies occupying Ireland.  Typical English food became more common during that time for the Irish too.  You know, since they were being influenced.”  He went on without stopping, as he had finished his little snack. 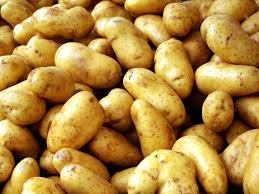 “Later, when the Great Famine occurred from the Mid-19th to Mid-20th centuries, Potatoes really were all that was left for the Irish to eat.  They did their best to get creative with ‘em by making up dishes like the famous “boxty,” a potato pancake.  Another potato dish included sausage and bacon.  They called it “coddle.  Have you ever heard of “colcannon” Chef?”  I shook my head from side to side.  “It’s another potato-based dish, of mashed potato, cabbage (or kale) and butter. Umm umm, and is it good.”

“ I didn’t know about boxty, coddle or colcannon,” I said.  “What I find so interesting is how so few ingredients are brought together in such hearty and nourishing ways.  Don’t you find it fascinating that from those times of hardship and poverty grew some of the tastiest and simple of dishes?”

“Yes, ma’am thanks to those who were suffering and doing whatever they could for their families,” he mused.

I went on.  “One of my Italian favourites, Panzanella, is a salad prepared with soaked, day old (at least a day) bread tossed together with fresh, sun-ripened tomatoes, olives from the orchard, fresh basil and mozzarella cheese.  I can just see it being served in a chipped, hand-me-down bowl, glistening with olive oil and balsamic vinegar.  This dish emerged from the peasants of Tuscany.  And I can’t forget Minestrone, created by the peasants of Rome.  Now it’s a mainstay in almost every Italian restaurant.”  I continued to show off.  “And there’s Ratatouille, the French version of a poor man’s hearty stew.   And Succotash, which can be cooked up as a stew or casserole.”

“Yes, I know all about Succotash, Chef.  Corn, lots of it, lima beans and other shell beans, mixed with whatever else can be harvested from the garden.  But did you know Succotash made its debut during the Great Depression?” my friend injected.  “Now you’ve interrupted me enough, Chef.  I’m not done schooling you.  I don’t think you know about another Irish favourite, Burgoo, otherwise known as “Roadkill Stew.”

“Actually, I have,” I replied.  I recently became familiar with this one-pot wonder after reading Hillbilly Elegy, by J.D. Vance. My friend was pleasantly surprised by this and went on to talk about Burgoo and all the fix’ns until the Chieftains finished playing. 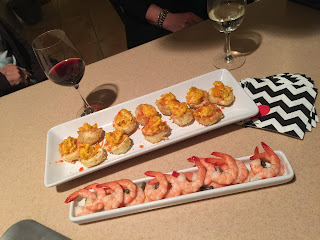 By Friday night, armed with new knowledge of the Irish and Scots-Irish food history, I was ready to prepare a memorable and atypical Saint Patrick’s Day meal.  I started with appetizers; Pickled Shrimp and Deep-Fried Deviled Eggs.  They were delicious if I do say so myself!  After eating all the shrimp and deviled eggs then washing them down with a couple of ales, we sat down to a piping hot conglomeration of Black Tail, Dark Chicken and Pork.  I apologized explaining I couldn’t get my hands on any squirrel, Vegas only has those little chipmunks.  Which I guess would’ve worked too.  He had told me Burgoo traditionally has three meats in it; squirrel, pheasant, chicken, or whatever one could rustle up.  “If it walks or flies, it can go into the pot,” he had said.  I had allowed the stew to simmer all day long, in a Dutch oven brimming with Okra, (I used Kale instead) Lima Beans (I used White Kidney) and Tomatoes.  I finished the stew off with Filé, a sassafras powder for thickening while adding a unique Southern taste. 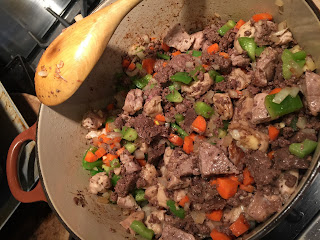 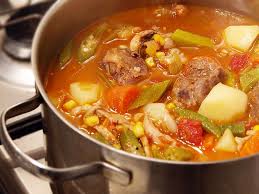 The stew was complemented by a Green Salad with Ranch Dressing (not my favourite but buttermilk so, of course) and Grilled Cheese Sandwiches made with homemade Spicy Pimiento Cheese and Fried Green Tomatoes.  Dessert; a Kentucky Bourbon Butter Bundt cake, with a Bourbon Glaze poured over the top.  He was in Scots-Irish Food Heaven! Before being “schooled” on the Irish migration to the Rust Belt and their culinary integration, I would have thought it a stretch going from Corned Beef and Cabbage to a Southern Burgoo Stew for my St. Patrick’s dinner.  Now I knew better.

Over dinner I brought us back our previous conversation telling him I got the boiled potatoes and cabbage component of what many consider traditional St. Paddy’s Day fare, but still had questions about the Corned Beef part.  But time didn’t allow for any more than just one question.   So I asked, “What about the St. Paddy’s Day Parade?  Where does that come in?”


“Well, let me tell you about that Chef.  After barreling their way out of that Great Famine, thousands of Irish and Scots-Irish  rode on ships for weeks to America, just like you saw in that movie Titanic.  Poor as all get out, they were down below.   When they finally made it to America many made Louisville Kentucky their new home.   By 1805 there was movement towards the Ohio River and many more moved to the Limerick District of Louisville, Kentucky.  Residents of Limerick lived in shotgun houses, at least the poor ones did.  The rich Irish lived in big houses called Lace Mansions.  Anyway, it was in Limerick, and so many Catholics, 1872 the first St. Patrick’s Day Parade was held in honor of Saint Patrick, known as the “Apostle of Ireland.”  The main Saint of Ireland along with a couple of others on the side, he’s considered the founder of Christianity in Ireland.  So he was deemed someone to celebrate in the new land.”

Here's my recipe for Burgoo:

Process: 1) Cut all proteins into bite-sized cubes. Heat oil and butter in a large Dutch oven or heavy pot over medium heat.  Working in batches so you don't over-crowd the pot, add the beef and cook until browned.  Set aside on a large plate.  Continue this with the chicken and pork until all proteins have been cooked.  They won't be cooked all the way through yet.
2) Add more oil and butter if needed to same pot adding diced carrots, bell pepper and onions.  Cook until fragrant and translucent.  Be sure to scrape up  all that good flavor on the bottom of the pot from the meats. Add the minced garlic.
3) Return the browned meats to the pot, adding 2 cup of the water and 2 cups of the broth.  Cook over low heat for about an hour.
4)Add remaining water and broth along with the cubed potatoes, kidney beans, corn and kale.  Stir in brown sugar, vinegar, Worchestershire sauce and tomatoes with the juice.  Season to taste with salt and pepper.  Continue to cook on simmer for another hour or two.
5) Once meats are cooked through and tender, add the fresh parsley and thyme, taste for additional salt and pepper then serve.  If stew is too thick for your liking simply add more broth or water.

Posted by CosmicMuffin at 1:48 PM No comments: